Siri the Viking – THE EMPEROR’S TREASURE

It is spring, and the Vikings are preparing to set sail for Miklagard. But Siri is told she has to stay behind! Her Dad, the chieftain, says that the journey is too dangerous for a little girl. But if he thinks that is going to stop her, he’s wrong. She stows away on his ship.
Aboard the same ship is a mysterious box meant to be delivered to the Emperor himself.
But the villainous duo Ivar and Grim are eager to get their hands on the box, and Siri has to use all her courage and cleverness to protect it.
Luckily, she is helped by Zack, a mysterious boy she meets in Miklagard. But who is he really? 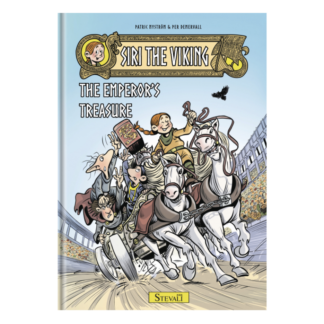